This document covers how to bring change data capture (CDC) data from your source into Rockset. CDC data is any stream of records that represent insert/update/delete operations taking place on some source system.

If you're looking for the automated CDC templates, skip ahead to their reference below.

How To Ingest CDC Data

Ingesting CDC data is largely automated with CDC templates discussed below, but here we'll explain how it works in case your desired CDC format does not have a corresponding template, or you want to configure it manually.

Once you bring your CDC data into one of Rockset's supported data sources, or configure your application to send CDC records to our Write API, you need to create a collection in the Rockset console and configure an ingest transformation to

You can read more about the semantics of Rockset's special fields here.

The _op field is how Rockset knows whether to treat records as upserts or deletes. Note that Rockset does not distinguish between insert and update and instead views any write type operation as an upsert.

CDC formats typically have a unique code for whether the record is an insert, update, or delete. You can write your transformation to account for this using conditional expressions like CASE or IF.

For example, if a format has a field changeType which is one of [CREATE, UPDATE, DELETE], then you would map this to _op with an expression like

or if the format is such that for delete operations an after field is null, otherwise it is not null, then

Tip: A common gotcha here is remembering that SQL uses single quotes for string literals. So having a predicate comparing to "DELETE" (double quotes) will actually look for a field called DELETE and not do what you're intending.

The primary key of your source needs to map to the _id of your documents in Rockset so that updates and deletes are properly applied. In the case of single primary key, this is as simple as

In case of compound primary keys in your source, you need to map the fields of the primary key to a unique string. We have a built-in SQL function, ID_HASH, exactly for this purpose.

We strongly advise you use the ID_HASH function for these kinds of cases. But if you do choose to use another hash function, note that most have a return type of bytes, whereas _id must be a string type. Therefore if you use some other hash to construct _id, you should wrap it in another function like TO_BASE64 or TO_HEX that takes a bytes argument and returns a string result.

Though not strictly necessary like the special fields above, it is good practice to create a custom mapping for the document timestamp _event_time if the CDC format exposes the time of record creation. _event_time must be either a timestamp or an integer that represents the microseconds since epoch.

You can use any of the relevant timestamp functions to do this conversion, e.g.

Since _event_time is an immutable field on a document, you only need to set it for insert type CDC records, not update or delete. This means you can combine this with the _op logic like

Importantly, the else case above uses undefined which is equivalent to "does not exist". You cannot set it to null because a null event time is invalid and will cause the ingestion of that document to error.

Typically CDC records have a deeply nested structure and it's a good idea to pull out the fields you want to persist and index in your Rockset collection explicitly.

For example consider a CDC record of the form

Presumably here you want field1 and field2 to be ingested, so you should explicitly project them like (ommitting special fields for brevity)

You can also take this opportunity to do any field pruning or renaming, e.g.

The WHERE clause of the ingest transformation can be used to filter out CDC records that are unneeded. This can be useful if you have CDC control records in the stream (e.g. dropping a table) that you don't want ingested alongside data records. It can also be valuable if you have multiple CDC streams being piped through the same source and you want to only ingest some of them.

To help automate the process of bringing CDC data into Rockset, we have built support for a number of popular CDC formats directly into the ingest transformation process of creating a collection. These transformation templates can automatically infer which CDC format you have, and construct some or all of the transformation for you out of the box.

Below is a reference of the CDC formats for which automated templates are supported.

Note: Based on the specific configuration of your upstream CDC engine, it is possible the formats differ slightly from the expected format these templates reference. In that case you can use the template as a starting point to automate many aspects but may need to manually adjust some of the sections where your data model differs from what is expected.

Note: In order to get the most out of these templates, your source should have some records available for previewing during the collection creation process. This means it is preferrable to first configure your upstream CDC system to send records to a source and then to go through the collection creation process in the Rockset console. For cases where that is not possible, for example when sending records to the write api, consider first downloading a few sample CDC records to a file and creating a sample file upload collection to iterate on the transformation before creating your final collection.

For Debezium data, both JSON encoded and Avro encoded CDC records are supported.

Refer to the Debezium docs for any source-specific limitations, including how data types are mapped.

This is for Debezium records encoded using a JSON serializer to a destination like Kafka.

This is for Debezium records encoded using an AVRO serializer to a destination like Kafka.

Refer to the DMS docs for any source-specific limitations, including how data types are mapped.

Refer to the Datastream docs for any source-specific limitations, including how data types are mapped.

Refer to the Striim docs for any source-specific limitations, including how data types are mapped. The Striim template is compatible with the JSON and Avro formatters.

Refer to the Arcion docs for any source-specific limitations, including how data types are mapped.

This walkthrough shows the process of creating a collection on top of some sample CDC data. Here we'll work with Debezium CDC coming from a Postgres instance and being sent to a Kafka topic using a JSON serializer, which we assume has already been configured.

We navigate to the Rockset console to create a new collection and select Kafka. We fill out the Kafka topic name, set the offset policy to Earliest so any data we have in the topic prior to the collection creation will be ingested, and specify the format as JSON.

When we move to the second step of the collection creation process to set up the ingest transformation, we'll see that Rockset has already inferred the data we're bringing in is in Debezium format and has prepopulated the transformation template corresponding to Debezium. 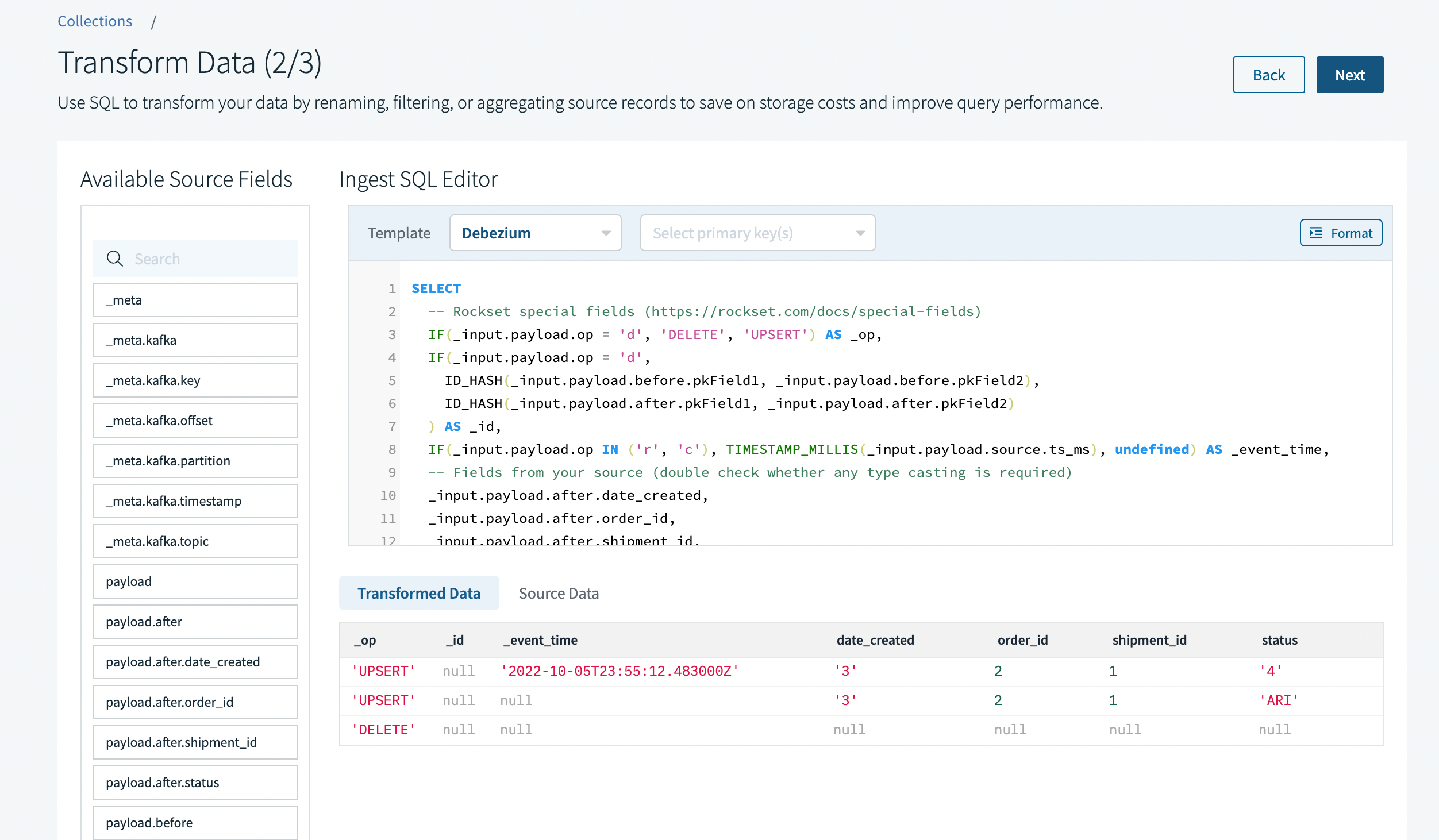 We're almost done, but Rockset doesn't know which fields correspond to the primary key in our source. So we click on the multi-select input for the primary keys and select order_id from the list of available fields Rockset has auto-detected. You can also type your own custom field name here. 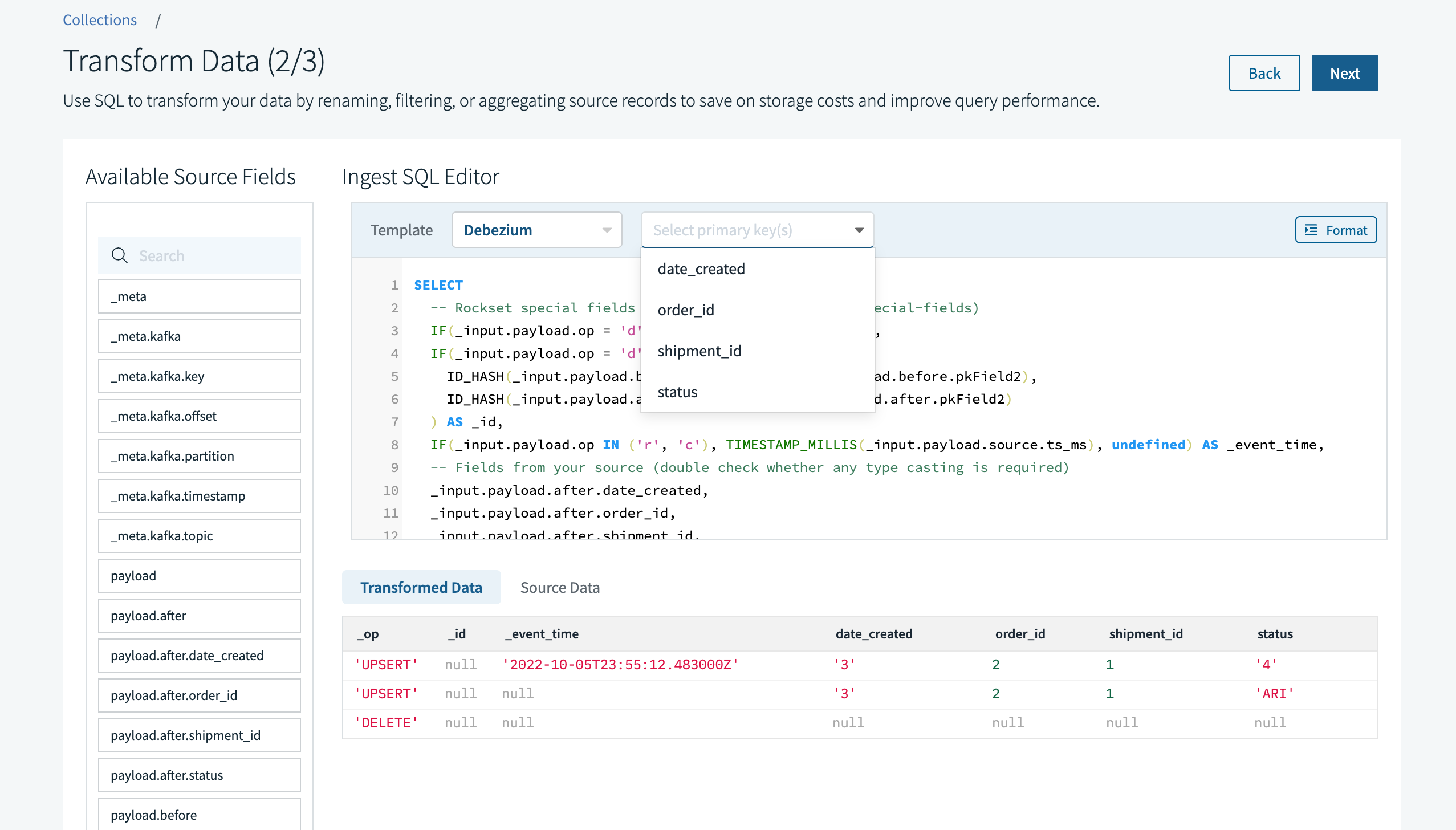 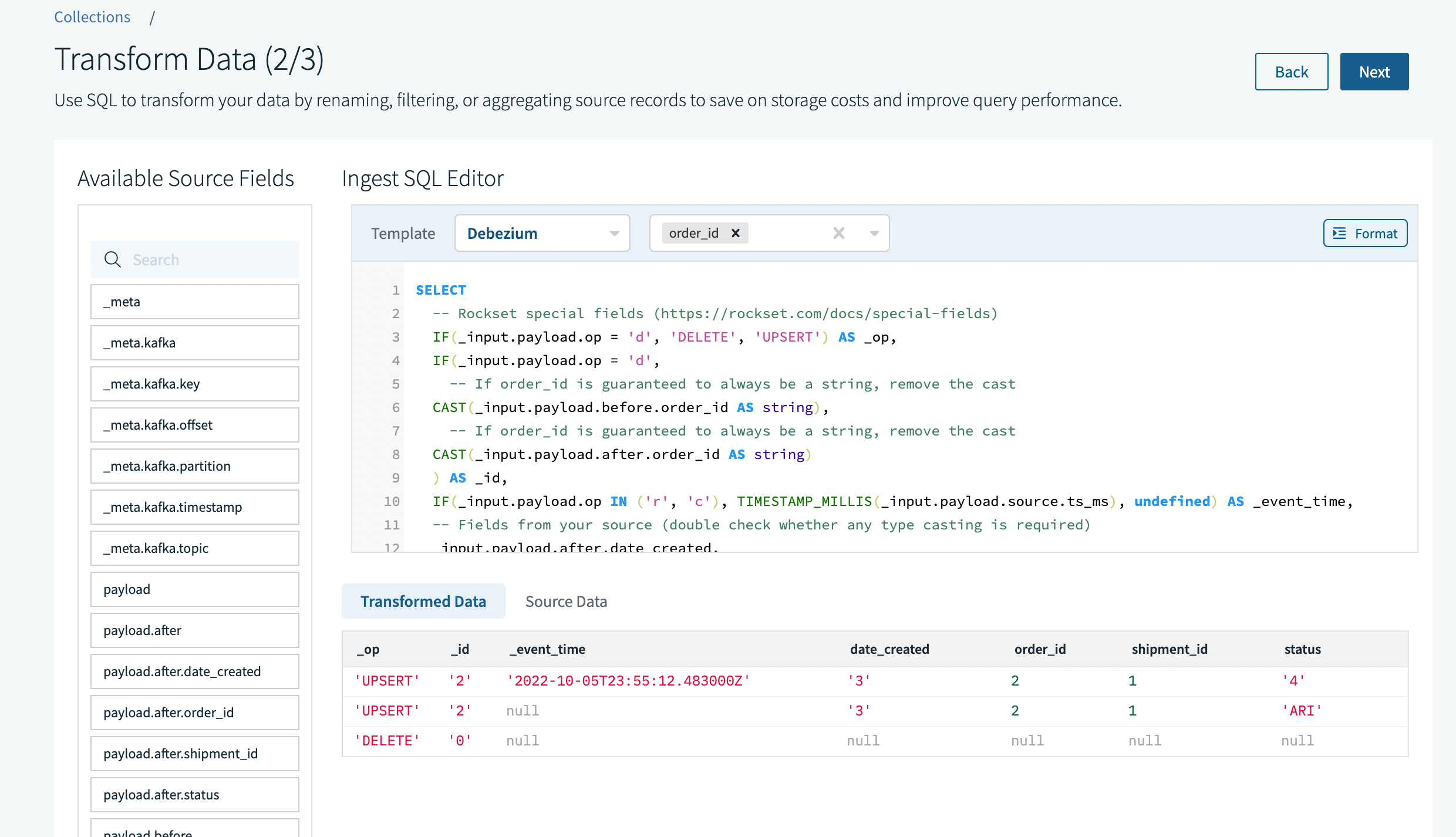 And that's it! It's a good idea to do a final inspection of the transformation to see if any additional type casting is required, if any of the projected fields may not be needed, etc. We can then complete the collection creation process and Rockset will begin ingesting the CDC records and applying the inserts, updates, and deletes accordingly.