A real-time database is one that can sustain a high write rate of new incoming data, while at the same time allow applications to make decisions based on fresh data. There is usually a time lag between when the data is produced and when it is available to query. This is called the data latency, or end-to-end latency, of the database. The data latency is different from a query latency, which is what is typically used to evaluate the performance of databases.

Data latency is one of the distinguishing factors that differentiates one real-time database from another. It is an important measure for developers of low-latency applications, like real-time personalization, IoT automation and security analytics, where speed is critical.

In this document, we describe RockBench in detail, including the data set that it generates and the algorithm it uses to calculate the data latency of a database. We ran the benchmark on Rockset, a real-time analytics database, to demonstrate how the benchmark can be used to test the ingestion of more than 1 billion events in a 24-hour period and measure the data latency of the database, which was in the 1-2 second range for most configurations tested. 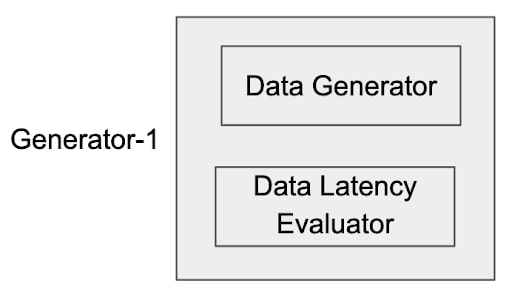 Figure 1: The benchmark comprises a data generator and a data latency evaluator

We use multiple instances of the benchmark when testing, where each instance has a unique generator_identifier. 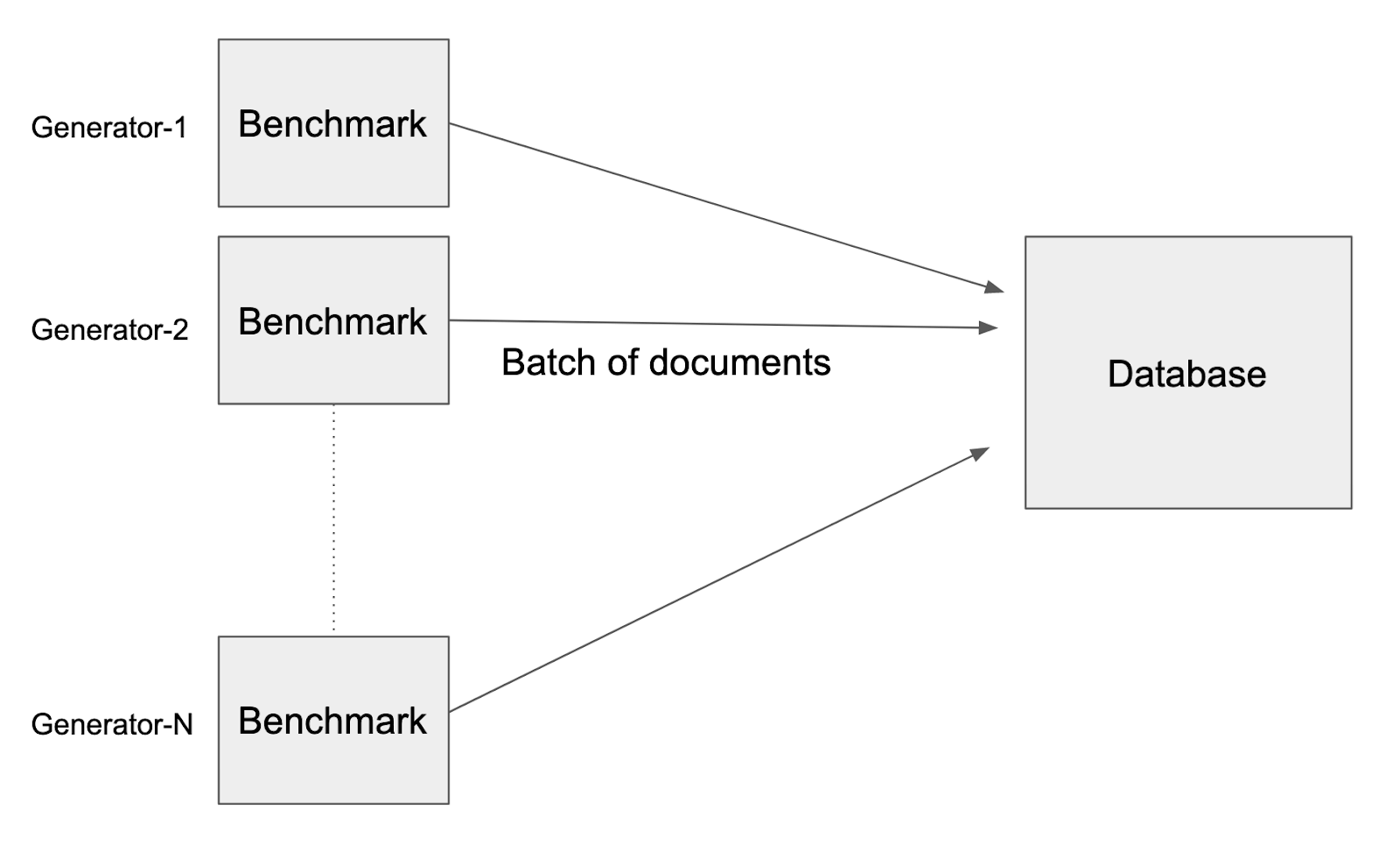 Figure 2: Multiple instances of the benchmark connect to the database under test

Some databases use a specialized bulk-load mechanism to load stationary data , but this benchmark is not meant to measure that functionality. This benchmark is intentionally designed to measure the data latency of streaming data, when new data is arriving at a fast rate and needs to be immediately queried and turned into real-time decisions.

The data generator generates documents, each document of size 1KB. Every document represents an event.

A single document has 60 fields with nested objects and arrays. Each document is uniquely identified by an _id field, and the data generator generates a uuid and stores it in the _id of every document. This means that the data generator adds new documents to the database and does not overwrite an existing document.

There is a special field called _event_time that is filled by the data generator when the document is created and before it is written to the database. There is another special field called generator_identifier in every document. The _event_time and generator_identifier are needed to calculate the end-to-end data latency that we describe in a later section. All other fields in the document are generated at random using a standard JSON generator at https://github.com/bxcodec/faker.

Refer to the Appendix for a sample document generated by the data generator.

Generated documents are then batched before being sent to the database. In many databases, bigger batches tend to reduce the impact of various overheads, such as network.

The data generator initially generates 1 billion documents into the database. Since each document is 1KB in size, this results in a total data set size of 1TB. No measurements were taken while seeding the database.

This step is needed so that all succeeding benchmark measurements are done on a reasonably sized database.The reason is that, in many databases, streaming data into an empty database is much less CPU intensive compared to streaming data into a large database. Therefore, in order for this benchmark to match most production settings, we prepared a 1TB database before starting the benchmark.

The data latency evaluator runs alongside the data generator and uses the generator_identifier described before to measure the latency on documents originating from that generator. The reason we use generator_identifier is to avoid the effect of clock skew on our measurements Since _event_time on a document is based on the clock time of the generator, we only want to use the data latency evaluator that is on the same machine to perform our latency measurements.

Every 30 seconds, the following query is made to retrieve the most recent document that was written to the database.

The _event_time of that document is then subtracted from the current time of the machine to arrive at the data latency of the document. This measurement also includes round-trip latency—the time required to run the query and get results from the database back to the client. This metric is published to a Prometheus server and the p50 and p95 latencies are calculated across all evaluators.

Running the Benchmark on Rockset

The data generator used Rockset’s write API to write new documents to the database. We ran the benchmark using write rates ranging from 4K to 24K events/sec and with batch sizes of 50 and 500 documents per write request.

We first seeded the database as described above and this seeding process took a few hours. No measurements were taken during this seeding phase. After the seeding phase was complete, we started the benchmark run to write new documents into Rockset and waited for the data latency values to stabilize before recording them. Both p50 and p95 latencies were recorded.

The data generators and data latency evaluators were run in the same AWS region as the Rockset database. We set ingest rate limiting for 2XLarge and 4XLarge to 12MB/sec and 24MB/sec respectively, which are the default values for these Virtual Instances.

Figure 4: Rockset data latency measured at a batch size of 50 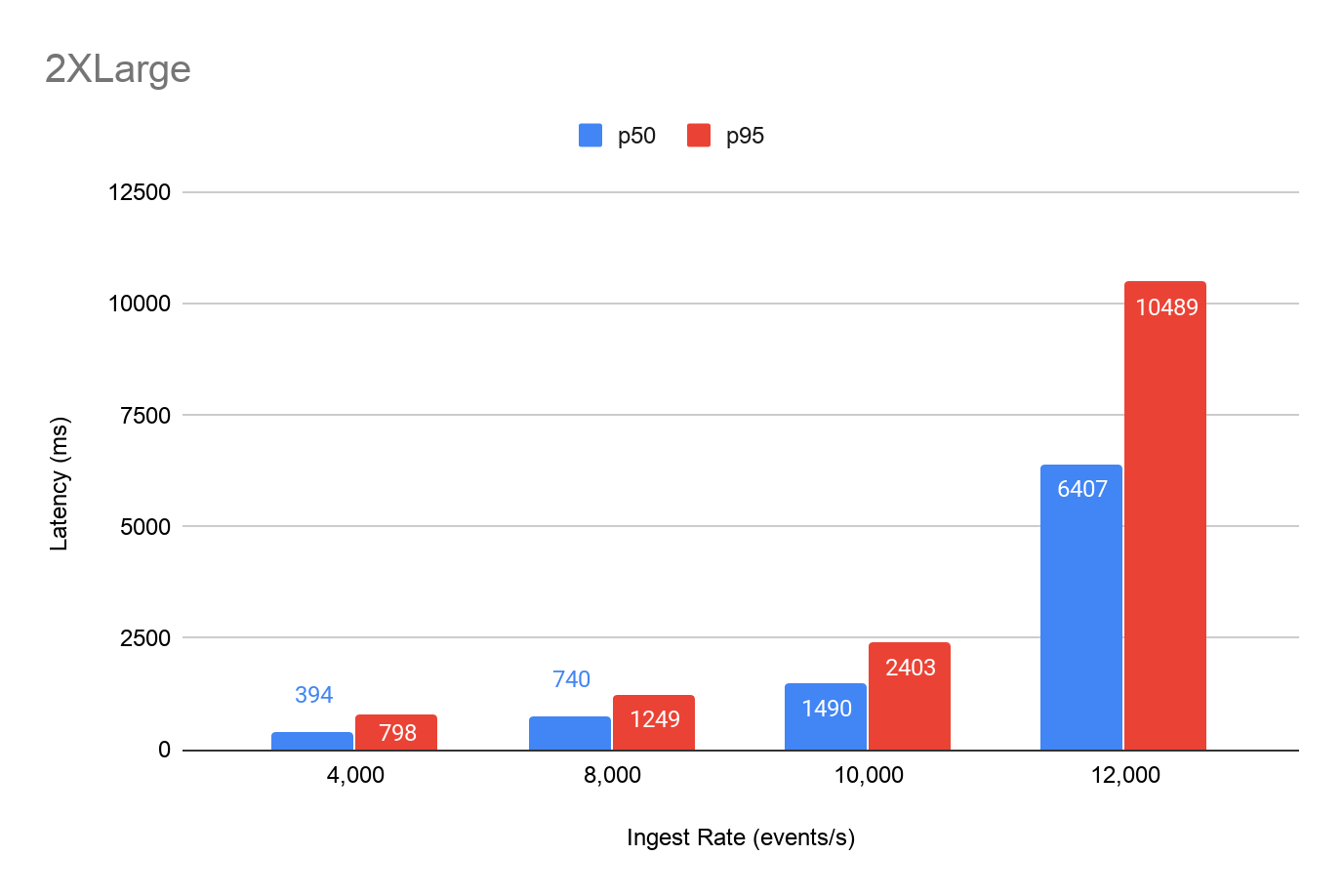 Figure 7 shows the results of running the RockBench benchmark on Rockset at a batch size of 500. Figures 8 and 9 graph the p50 and p95 data latencies measured at each ingest rate tested.

Figure 7: Rockset data latency measured at a batch size of 500 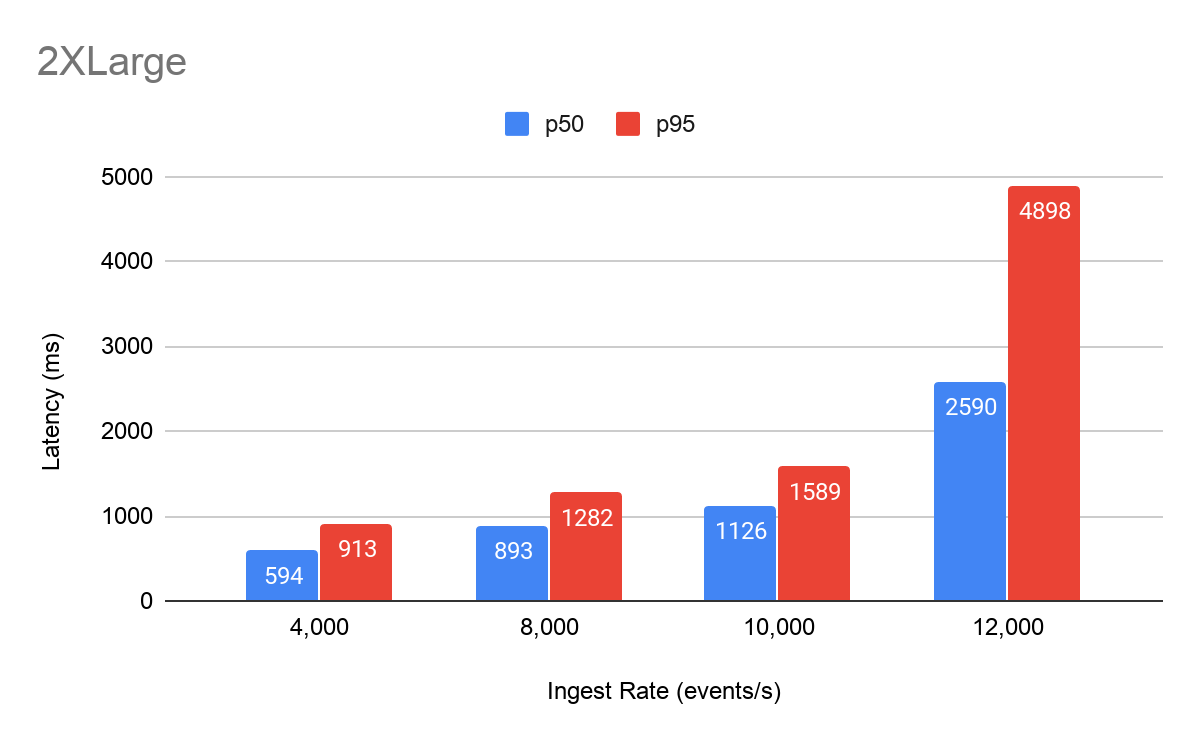 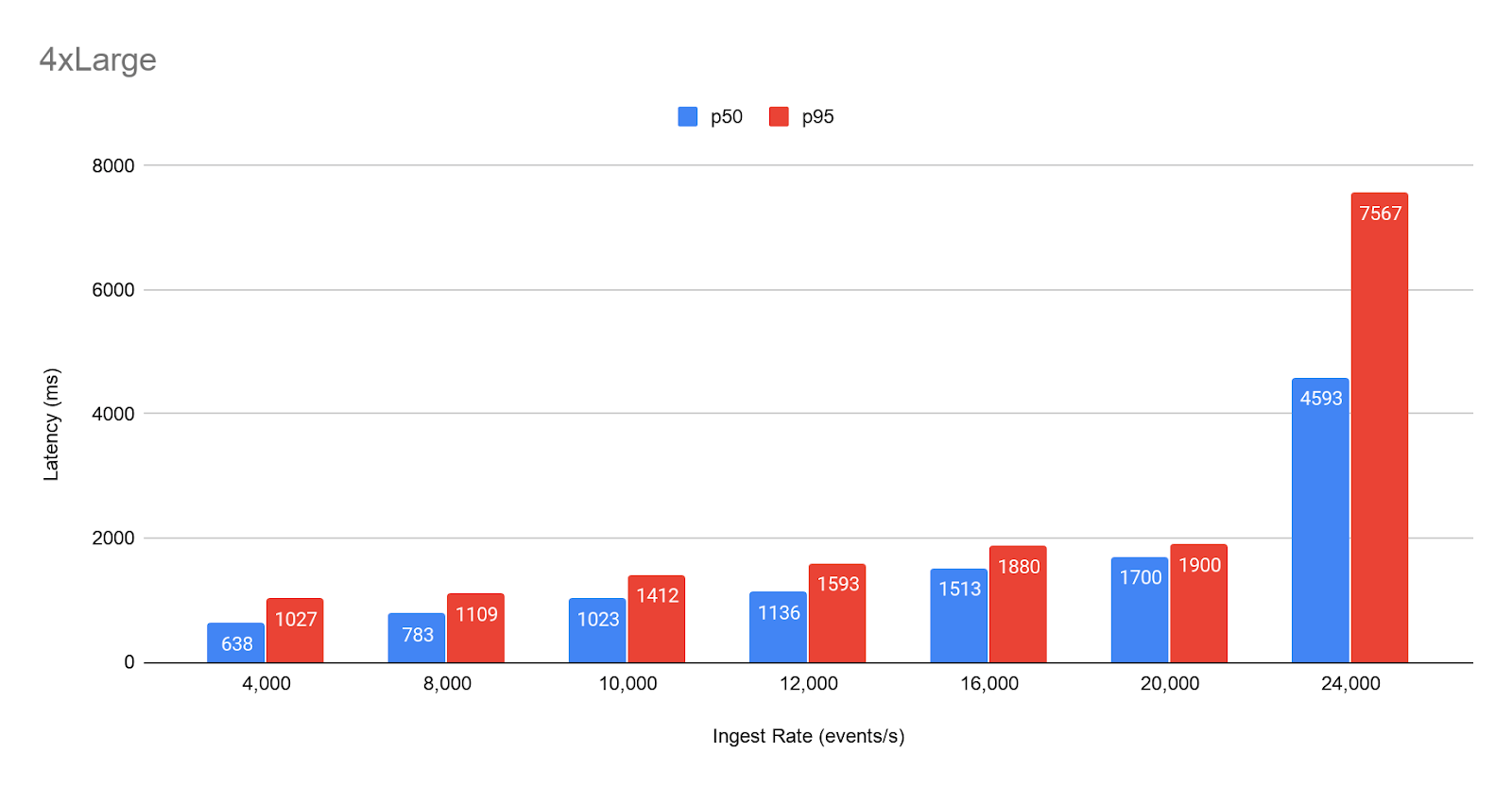 We observe that as data is generated and ingested at higher rates, the data latency—the time from data being generated to it being available to query—increases. Application developers should use the resultant latency metrics to gauge how Rockset can meet their application requirements.

For example, if an application needs to ingest 1 billion events per day (approx. 12 MB/s based on events of size 1KB) at a batch size of 50, a Rockset 4XLarge Virtual Instance will provide p50 and p95 data latency of 0.914 sec and 1.269 sec respectively. This means that a developer can expect to consistently query data, generated at a rate of 1 billion events per day, within about a second of when the data was produced.

Rockset uses a specialized bulk-load mechanism to ingest and index stationary data at terabytes/hour, but this benchmark does not exercise that functionality.

When using real-time, streaming data sources, developers will need to design their applications to support specific write rates and data latencies--the time from when the data is produced to when it can be queried by the application. RockBench provides developers a simple and reliable method of measuring the data latency of the underlying database under different write rates.

In our testing, we showed how one could measure the data latencies for Rockset under various assumptions for write rate, batch size, and instance size to determine the configuration that would best meet application requirements. The RockBench code is pluggable and extensible and the benchmark can be extended to run on other real-time databases as well. By testing different types and configurations of databases, developers can make informed decisions on which real-time database setup fits the requirements of their application.

This is a sample document generated by the data generator:

Rockset is a real-time analytics database service for serving low latency, high concurrency analytical queries at scale. It builds a Converged Index™ on structured and semi-structured data from OLTP databases, streams and lakes in real time and exposes a RESTful SQL interface.

Find out more at rockset.com

Connect with us at support@rockset.com